The Revival of Foods Fit for Hibernation 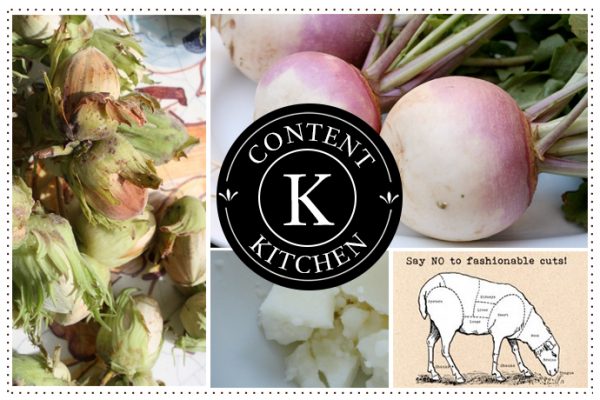 Whilst here at Content we love our daily dose of superfoods, we make sure that the majority of our diet comes from wholefood sources, the types of food that were eaten by our grandparents and great grandparents – the forgotten foods. This week our resident Nutritional Therapist Jennifer Derham enlightened us on her seasonal favourites that have faded from use (but we believe are surely due for a resurgence, if only more people knew about their nutritional benefits!). Read on to find out the forgotten foods and cooking methods you should be utilising and feasting on this Winter…

Slow Cooking – A slow cooker or a crock pot can be a life changing experience. There is nothing better than coming home in the winter to the smell of a warm winter stew or casserole. You simply combine all your ingredients in the cooker and allow them to cook when you are at work or generally engaged in other activities. After practising once or twice, you will have a huge crock pot meal thrown together in five to 10 minutes. Set it on “low” in the morning, and you’re done till dinnertime. There are many advantages to slow cooking:

• As foods are cooked at a relatively low heat over a longer period of time your food retains more flavour and has an improved nutrient content. Slow cookers generally have a setting that keeps the food under the boiling point of 212°F/100°C, usually around 200°F/93°C. In virtually all other methods of heating food, heats higher than this are involved.
• Cheaper cuts of meat can be used that improve in texture and flavour when cooked for long periods of time at low temperatures. These contain large amounts of collagen which breaks down into a rich gelatin during this long cooking process. Gelatin is an excellent source of amino acids which helps support healthy, skin, hair, bones and general well-being. On that note they are perfect for making broths including fish, bone and chicken broths.

Cobnuts – a type of hazelnut, wild hazelnuts and cultivated hazels have been grown in Britain for centuries. The first cobnuts of the season are green and are particularly juicy with a unique flavour almost like coconut. By mid September they have turned golden and the full flavour of the kernel has developed. Unlike most other nuts cobnuts are sold fresh and consequently they can only be bought when in season although stored nuts can be bought until Christmas.

Traditionally cobnuts were popular with mariners, as they kept fresh for months, and the Victorians loved them, breeding many varieties. Cobnut plantations, as nut farms were known, extended to over 7,000 acres, most of the orchards or “plats” being in Kent. Stored nuts were available for most of the year, and fetched high prices. Today only 200 – 250 acres of old plats survive, with the majority of our hazelnuts coming from Turkey. However new orchards are being planted again due to growing demand and interest in this native nut. Probably a good thing as there was a global shortage of hazelnuts this year, hence a large increase in price which some of you may have noticed!

Cobnuts typically contain 12% – 17% protein by dry weight, and about 10%- 15% fibre. They are very rich in vitamin E, calcium and are a good source of B vitamins. Although not registered organic most growers use few or no pesticides at all as cobnuts are not prone to pests and diseases.

Turnips – Little understood and largely ignored, this wonderful root vegetable was a staple in earlier diets as they are an inexpensive food and could be stored easily over winter ready to be used. Turnips are thought to have originated in northern Europe around 2,000 BC. They were one of the first vegetables to have been cultivated and were a staple across Europe before the potato. They come in a variety of forms, the most widely available being the squashed globe shape with creamy coloured skin and a purple crown.

Available most of the year-round, turnip is best eaten in early summer when fresh, tender, baby turnips are available, or at the end of the year when the more mature specimens make a tasty, healthy and economical contribution to a warming winter diet. For a root vegetable it has a low sugar content therefore a good staple for the winter months when our diets can be quite carbohydrate heavy. They have a rounded flavour, slightly peppery and sweet and nutritionally rich. They are rich in vitamin C, phosphorus and fibre and also contain vitamin B6, calcium, manganese, potassium and indoles – compounds that helps the body generate a number of beneficial enzymes.

They make a wonderful winter warming food as they can be easily mashed into a purée, or added to soups, stews, casseroles and roasts. Sauerruben, fermented turnip with caraway, is another great way to use this vegetable. A great accompaniment to any meal and good for digestion. Turnip has many medicinal qualities also helping improve circulation, and is generally considered helpful for indigestion and well as helping to relive coughs, colds and respiratory infections. Turnip is alkalising by nature and being a member of the mustard family, is a rich source of sulphur compounds which helps detoxify the body.

Although turnips have somewhat of an image problem in Britain, other nationalities view this vegetable much more positively. The French braise or sauté them, Italians use them in risottos and in Asia and the Middle East pickled forms are very popular.

Fats – Good or healthy fats including butter, tallows, lard, coconut oil, along with grass-fed meats are an important part of our diet during the winter months. The ancient diet of our fore bearers was typically high in fats, estimated to be roughly ten times our modern intake. In fact fat was highly coveted especially during the cold winter months when vegetation was scarce.

Fat is a more efficient energy source being a steady, long-lasting, even-burning fuel. We are designed to use fat as our ongoing source of fuel for most things except in emergency when glucose is released. The body and brain actually prefer fat as a source of fuel to glucose or sugar. Fat is our safest, most natural and most fundamental aerobic energy source essential to get through the long winter months. Dietary fats are needed for mineral absorption, the conversion of vitamins for example beta-carotene to vitamin A and also help slow down nutrient absorption so we can go longer without feeling hungry. Not only that healthy fats from animal and vegetable sources are rich in EPA and DHA, fat soluble vitamins including vitamin A, E, and D, while also providing the tryptophan your body needs at a consistent level helping to keep your mood elevated during the short dark days.

Unfortunately the use of animal sourced fats has been actively discouraged over the last few decades since the introduction of vegetable oils which were championed for their health promoting qualities. It is worth noting that new research and studies have shown that societies across the globe who subsist on a diet rich in animal fat have a lower incidence of cardiovascular disease and many other modern age diseases which seem rampant in our society!

However many of these traditional old fashioned animal fats such as butter, lard and tallow, cherished by previous generations, are making a come back. Lard is rendered fat from pork and tallow is rendered fat from animals other than pork such as beef. Although many people are still abhorred by the idea of using lard, there are some wonderful qualities and health benefits to this fantastic ingredient making it a great addition to any kitchen over the winter months.

Lard has a fatty acid composition similar to olive oil and avocados, both recommended for their cardiovascular benefits and maintaining good cholesterol levels! The primary fatty acid in lard is mono-unsaturated. This comprises 40-45% fat content with the remainder being a combination of saturated and polyunsaturated fat all of which have have health supporting benefits. Mono- unsaturated and saturated fats not only nourish the body but help us absorb vitamins and antioxidants from our food. Lard is also an excellent source of vitamin D, next in line to cod liver oil. Pigs are like humans in that they have only one stomach and they have the ability to manufacture vitamin D in their skin. However pigs are much more efficient at it than we are.

It is estimated that 1 tablespoon of lard contains 1000 IU of Vitamin D! And we all know that Vitamin D is a powerful immunity booster, which can help prevent colds & flu. Worth noting also is that lard (and tallow) is more resistant than unrefined coconut oil and olive oil to damage from heat from cooking. We are not talking about lard found in supermarkets, it needs to be rendered from the fat of organic, pasture raised pigs therefore farmers or farmers markets would be your best option. Lard is fantastic too for frying, sautéing, braising and baking and cooking simple things like eggs.

Organ Meats – Offal has been prized and held in near sacred status by traditional societies and cultures the world over. Not too long ago organ meats were extremely popular and older cookbooks are found laden with recipes for kidney, liver, brains, tongue and sweetbreads. Every bit of the slaughtered animal was used as nothing could afford to be wasted. Interestingly, wild animals eat the organ meats of their kill first leaving the remainder for the scavengers. Unfortunately the idea of these foods can leave many feeling squeamish, however the more adventurous are showing more interest in nose-to-tail cooking.

Organ meats are nutrient rich as the organs, particularly the liver, are the storage depots for vitamins. They are also extraordinarily rich in fat soluble vitamins A and D, B vitamins and essential fatty acids, much needed during the winter months to help maintain a healthy immune system.

Liver is literally a power house of nutrients, and in fact, liver would often be served once a week to boost the system. It is one of the best, if not the best source of iron, as well as true Vitamin A and D, zinc, copper and a wide range of antioxidants. Seek out liver from organic or pasture fed animals, as the liver is the detoxifying organ of the body and it is better to be on the safe side. Although organic liver may still contain some toxins, its nutritional and medicinal benefits far out weigh this.

If you want to introduce yourself slowly to organ meats, it is generally recommended to start with sweetbreads (thymus gland of a young calf). Although the thought of them may not seem appetising at first, they are in fact delicious and taste much like chicken. Other organ meats are stronger tasting and have more interesting textures.

There are plenty of ways to incorporate organ meats into other dishes such as winter stew and casseroles, so that you will not even notice you are eating them but are availing of their nutrient content. Organ meats are essentially the best multivitamin and mineral complexes you will find. To cap it all, organ meats are generally inexpensive due to their lack of popularity so they are a wonderfully cheap way to eat well over the winter months.

BOOK A NUTRITIONAL CONSULTATION WITH JENNIFER | HOW TO HIBERNATE