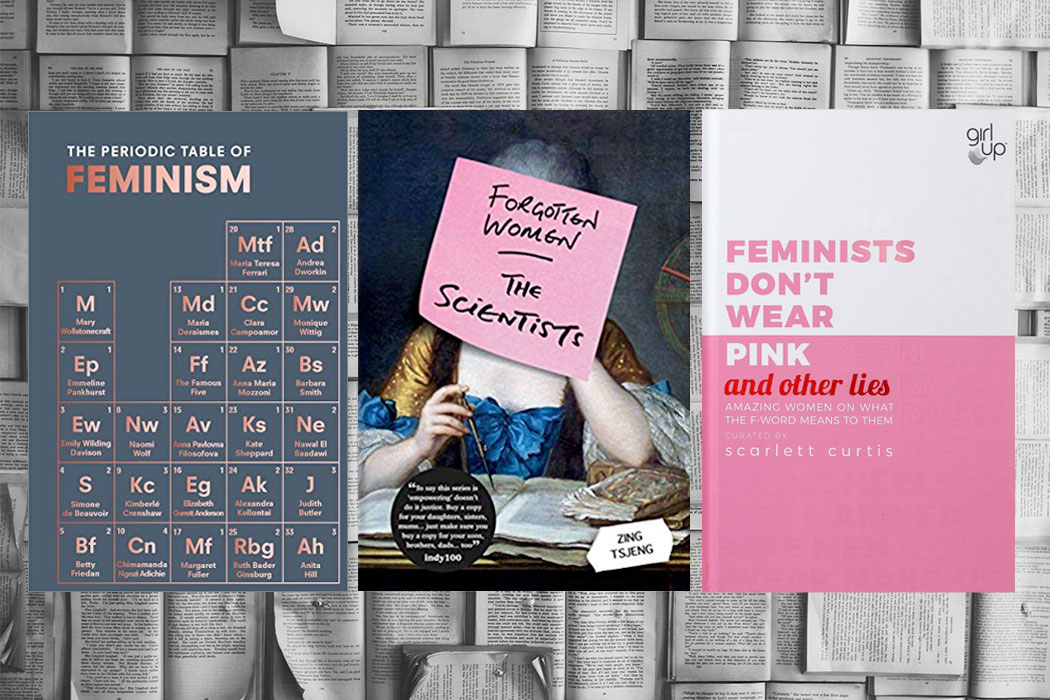 We are living in inspiring and revolutionary times for feminism, witnessing movements such as “Me Too”, “HeForShe” and “Time’s Up”. Correspondingly, the current literary market has been enriched by the publication of an array of unique and liberating ‘new era’ feminist manifestos.

The below are three of our current favourites. They are books written by women, discussing what it is to be a woman, and how womanhood is intrinsically linked to feminism and the ongoing efforts towards equality. These particular selections feature those who ignited the original spark that was first wave feminism, to those who have kept the fire burning for decades, and the prolific females of today who have taken up the torch to continue the work that has gone before them.

The Periodic Table of Feminism by Marisa Bate

“After centuries of women’s stories being intentionally forgotten or deemed unimportant, just shining a light on these women’s lives is a feminist exercise in itself. But this table aims to situate those lives within the feminist movement, and also to paint a bigger picture of its place in the world.”

The Periodic Table of Feminism is as informative as a text book, but as engaging as a work of fiction. The inside cover of the book offers a unique presentation of the feminist movement, highlighting the many international figures who have shaped it by way of an actual periodic table of feminists. There are precious metal elements (leaders, the face of the movements), catalysts (pioneers, fire starters), conductors (bringing people together, organisers), diatomic elements (women working together), stabilizers (the peaceful pacifists), and explosives (radicals, anarchists, violent). Organised into the waves of feminism, from first through to fourth, the table is an accessible presentation, which will help readers understand each woman and their efforts individually, as well as to see the movement as a whole. Featuring 130 women in total, as well as some additional ‘top ten’ lists, the book will teach readers new things about the women they already knew, and introduce them to many more they should know.

“A self-described “bitch on wheels”, Sylvia Rivera (1951–2002) was a teenage runaway who became one of the world’s earliest and most passionate advocates for transgender rights. “In many ways,” one writer noted in a Village Voice obituary following her death in 2002, “Sylvia was the Rosa Parks of the modern transgender movement, a term that was not even coined until two decades after Stonewall.”

Never heard of Sylvia Rivera? A lot of people haven’t, and thus the purpose of Zing Tsjeng’s series ‘Forgotten Women’. Rivera is featured in the edition dedicated to forgotten ‘Leaders’, but Tsjeng has also authored editions for the female ‘Artists’, ‘Scientists’ and ‘Writers’ whose work and efforts have been indisputably influential, yet largely unacknowledged or incorrectly attributed. Over the course of history, countless women in numerous fields have been overlooked, despite the fact that their contributions have been invaluable. Tsjeng’s series aims to shine a light on these women and pay them the respect and praise they so deserve.

Also worth noting that Tsjeng is the UK Editor of VICE.com’s female-vertical, Broadly, which we love!

Feminists Don’t Wear Pink (and other lies): Amazing women on what the F-word means to them by Scarlett Curtis

So writes journalist Scarlett Curtis in the introduction to her recently published curation of essays that explore what feminism means to all of us as women. Sometimes funny, occasionally heartbreaking, but always inspiring, this collection by women for women features pieces from well known columnists, activists, authors and actors. The different experiences are illuminating and complex, but all inherently linked, offering readers a sense of acceptance and understanding. The collection is less about explicitly defining feminism, and more about creating space for conversation, and helping readers identify their relationship with the ever present F-word.

Further Reading
We make space for the things we believe in…

Once you’ve decided to make the switch to organic beauty, it can be difficult to know where to start. Which products should you tackle first?…