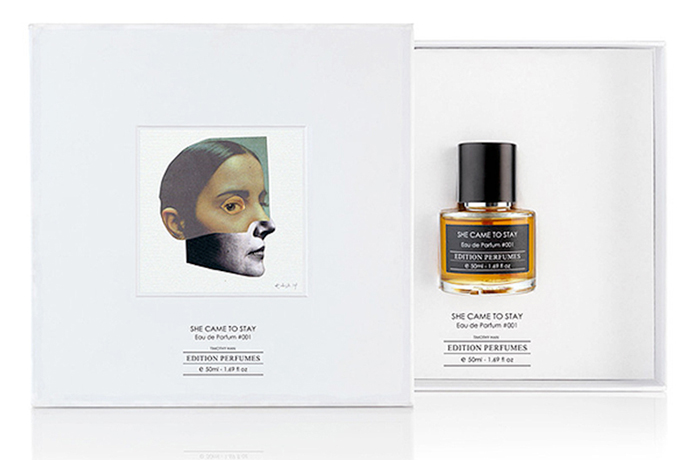 The first edition of a new natural perfume from London’s own Edition Perfumes has arrived. Created by Timothy Han, this UK handcrafted, artisan perfume elicits a sensory story like no other. Based in the creative heart of East London and inspired by the golden age of perfumery, Timothy works by weaving together the purest natural ingredients to create a unique sensory story.

The first scent She Came to Stay is inspired by the novel of the same name written by Simone De Beauvoir in 1943. Formulated as a unisex perfume, it tells the story about our perceptions of a world on the edge of change and the evolving nature of our relationships with those close to us. With collaboration and art also at the heart of Edition Perfumes, Timothy has worked with self-taught artist, Kirtland Ash who began his career in Los Angeles in 1997 painting detailed, abstract images. His recent work is primarily collage, fusing text and images on paper to explore the human form. There are five unique art-works that grace the boxes of ‘She Came to Stay‘  and the first edition of this perfume is limited to only 500 bottles. 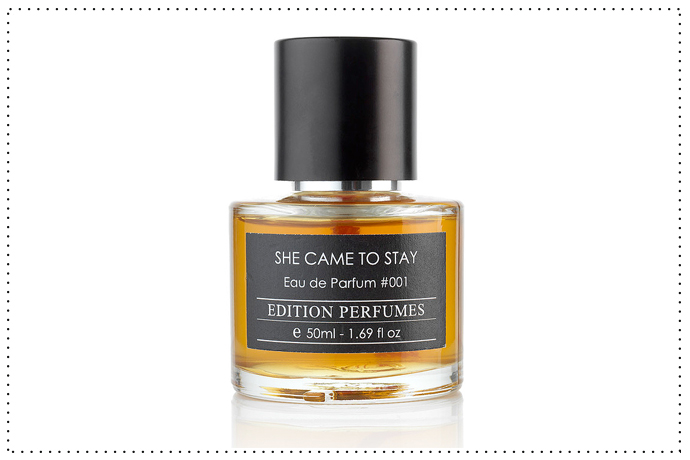 Surprised at the lack of natural fragrances on the market, Edition Perfumes began when Timothy began experimenting with blending scents to create his first fragrance. We caught up with perfumer Timothy to find out more about one of our favourite #GreatBritishBeauty finds…

What was it that provoked your entry to the world of natural fragrances?

Oddly it was a conversation a few years back with a friend who creates drinkable perfumes (the mixologist Paul Tvaroh) that got me onto the idea of creating perfumes. As for it being natural or not – that wasn’t any conscious decision but merely based on my Canadian upbringing which was very much about trying to live a life with minimal negative impact.

What is your fragrance philosophy? (i.e. using natural ingredients, perfume as an art form etc.)

I would say my philosophy is not to have a philosophy… at least not so much an intellectual one surrounding ideas of fragrance. If anything I would say it is very much about the quality of the perfume and trying to capture some of the spirit of the golden age of perfumery. I do find that many contemporary perfumes are overly complex which is a shame because it doesn’t allow the full depth of single notes to shine through.

Fill us in on the inspiration behind ‘She Came to Stay’.

She Came to Stay is based on the 1943 novel of the same name by Simone de Beauvoir. The story is about her relationship with the philosopher Jean Paul Sartre and is an existential look at not only one’s perceptions of a world on the edge of change, but also the evolving nature of our relationships with those close to us and more importantly ourselves. Even though the novel is written over 7 decades ago I felt that the themes still very much applied to today and I wanted to capture this through scent.

We are suckers for beautiful packaging. Tells us about the art on the boxes that encase the fragrance — how does it tie into the concept?

The box art was done by my friend, the American artist Kirtland Ash. At the time that I proposed working together, he was working on his forthcoming project called “Lidl Women”.* The project very much brings into question the notion of identity by fusing together through collage the faces and bodies from various people both known and unknown to create new personas. This concept very much tied into the story She Came to Stay and the questions it raises around identity and relationship. Kirtland took this concept and create a series of new faces which we have used for our covers.

WE LOVE: The inspiration behind the brand; literature, art and the golden age of perfumery. Modern perfume has become an everyday product we spray on without much thought. The art of creating and wearing a fragrance has been lost on mass produced synthetic scent. We love that Edition Perfumes celebrates perfume as a way of telling the wearer’s story. We shall be wearing it as the final component of dressing for a special occasion which can then be treasured as a scent memory, to be sparked every time we wear the fragrance.

GET THE LOOK: Natural Beauty – ‘The Statement Lip’ by ILIA Beauty

A bright statement lip for Spring is a must! Few can resist a pop of bright colour on lips come the balmier weather. We’re looking to ILIA…