AROMA APRIL: The Beauty of Juniper 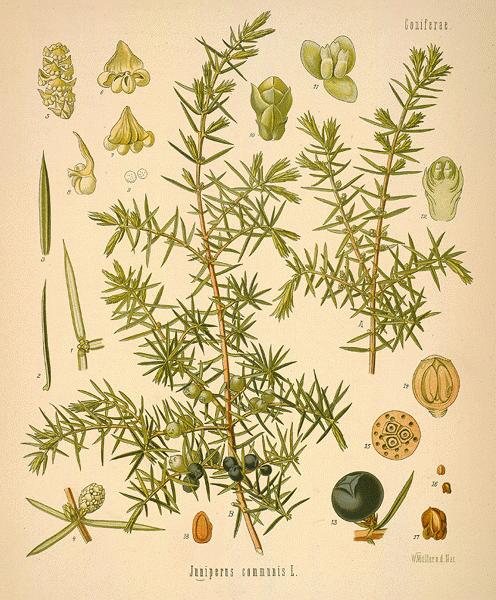 The next up in our Aroma April Fragrant Flowers series is the detoxifying juniper. We take a look at the plant, the properties and the uses.

Belonging to the Cupressaceae family, Juniper is a coniferous shrub widely distributed throughout Eurasia and North America. Bearing berry-like aromatic foliage, the essential oil from the Juniper berry is won via steam distillation. Used as a spice and sauce in a variety of culinary dishes, Juniper berries are best known as the primary flavouring for certain alcoholic spirits and liquors.

Possessing a fresh, woody-balsamic and slightly sweet aroma – Juniper berries have been noted to evoke feelings of love, wellbeing and balance. Although the majority of Juniper oil is derived from the Juniper berries; oils can also be found within the needles and twigs of the shrub – however, this aroma is not classified to be as uplifting as that found within the berries so is generally avoided.

Juniper was mentioned in the ancient Egyptian Papyri and was found in ancient tombs at multiple sites. It is believed that the Egyptians would have imported the Juniper berries from Greece. The Greeks believed that the consumption of the berries would increase stamina and endurance, so it was common for the athletes to use Juniper berries to improve their performance at the Olympic games. There has also been a history of Romans using the berry as a substitute for the expensive black pepper imported from India. Its fragrant wood, needles and berries were also used as incense and were thought to have the power to ward off evil. However, one of the most popular uses of Juniper has been to flavour Gin. The Dutch called juniper “genever” and hence the name ‘Gin’ was derived from this Dutch word.

Juniper is useful for the treatment of arthritis, rheumatism, neuralgia and muscle aches and pain. It has been used to stimulate menstrual flow and relieve menstrual cramping and other PMT related symptoms. It is traditionally used for urinary infections but should be avoided in cases of acute kidney inflammation. Juniper is energising and restorative. It may help to cope with nervous exhaustion, mental fatigue, anxiety or other stressful conditions but should be avoided during pregnancy.

The start of a new year brings a new flow of messages from the media encouraging us to lose weight, quit sugar, give up…