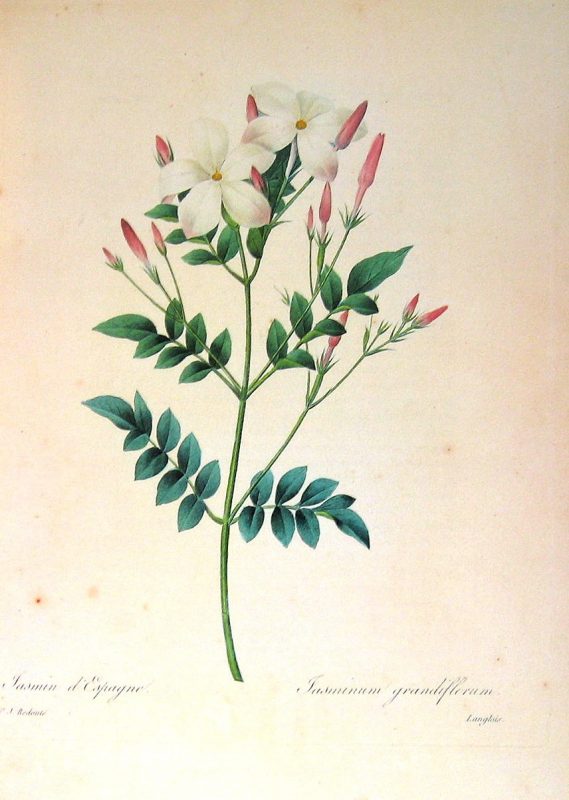 Jasmine is a member of the olive family also known as Oleaceae. The small white flowers of this vine-like evergreen shrub are intensely fragrant and found in most modern perfumes. Similar to Tuberose, Jasmine is often referred to as ‘moonlight of the grove’ as its seductive, complex and intriguing scent has long been known to reach its peak late at night.

The flowers are typically white or yellow, sometimes appearing in a slightly reddish colour. The flowers are born in clusters with a minimum of three flowers carrying about 4 to 9 petals. When in full blossom their fragrance seems elegant and feminine. The fruit of the Jasmine plants are berries and turn black when ripe.

There are approximately 200 species of Jasminum that are native to tropical and sub-tropical regions of Asia, Africa and Australasia. Only 1 species is native to Europe. Some botanists now agree that the plant originated from the northern parts of the Himalayas in India as well as certain places in Egypt and Persia. Jasmine has been thought of as the “queen of flowers” since ancient times and the name Jasmin is derived from the Persian word “Yasmin” meaning fragrant flower. During the Sung dynasty (960-1279 AD) the Chinese emperor had Jasmine in his palace grounds so he could enjoy its fragrance. In the 14th century Jasmine was also planted for kings of Afghanistan, Nepal and Persia. This fragrant plant found its way to places across the ocean, beginning from areas along the Arabian Sea, such as Persia and India, then crossing the Red Sea into Egypt. Before spreading to areas along the Mediterranean Sea and Western Europe in the 16th hundreds, reaching the territory around the Aegean Sea. Later in the 17th century, Jasmine was introduced to Britain.

Jasmine has a sweet, exotic and richly floral scent that reaches its utmost potency after dark. To ensure the odour of jasmine is preserved within its most potent hours – it is essential that the flowers are gathered at night because. After collection, the flowers are laid out on cotton cloths, soaked in olive oil for several days and then extracted leaving the true jasmine essence. Some of the countries producing jasmine essential oil are India, Egypt, China and Morocco.

The aroma of jasmine essential oil stimulates the release of serotonin, gently lifting the mood. Due to its constituents such as Benzaldehyde and Benzoic Acid, it can be used as an antiseptic as well as a disinfectant and is commonly used as an inhalant to relieve respiratory conditions. Whilst possessing calmative properties, known to induce a restful sleep, Jasmine has additionally has been used as an aphrodisiac for centuries. Due to its potent emmenagogue properties known to promote a health balance of hormonal levels – jasmine is an especially essential scent for woman. Studies have also shown that inhaling the molecules of jasmine oil transmits messages to the limbic system of the brain, the area involved in controlling emotions.

We all know that good things come to those who wait, but Amala have released a new targeted treatment that delivers impressive corrective results,…