What Lies ‘Under the Mistletoe’ – A Brief History 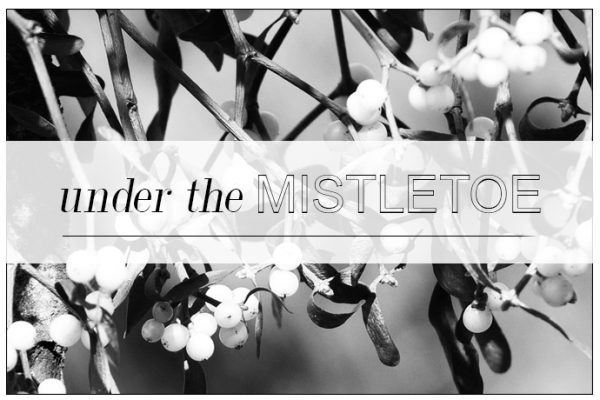 Ever wondered where the tradition of kissing under the mistletoe during Christmas comes from?

It’s probably one of those questions which, similarly to ‘why can’t we sneeze with our eyes open?’ seem to surface only in the presence of that event occurring – only to be forgotten again shortly after. Luckily, we’ve looked into it so you don’t have to! After all, we love anything that brings people together – especially if it revolves around plants and ancient folklore. So, read on the fascinating history of kissing under the mistletoe below.

The Plant – To start off, a bit of background about the plant itself: mistletoe is a “hemiparasite”- meaning a partially parasitic plant which grows on branches and trunks of a tree, with its roots penetrating into the tree and taking up its water and nutrients. There are two types: the one we see used as a Christmas decoration (Phoradendron flavescens) and with red berries is North American, while the other type, Viscum album, is native to Europe and Great Britain and has white berries (toxic to humans, but not several bird species) and yellow flowers and it grows on apple trees. When found on Oak Trees, it is viewed as a good omen. The berries are coated with a sticky substance known as Viscin, which stick the seeds to a new host plant after a berry-eating bird has dispensed it. This allows the plant to dig deeper into the host tree.

The Legend – So, how did such a plant reach the point of becoming mystical and even sacred? There are different tales throughout the centuries, starting from the ancient Greeks. As mistletoe remains green throughout the whole year and bears fruit, it was seen as a sacred fertility symbol and an aphrodisiac, which is where the custom of kissing under the mistletoe may have started. The Greeks believed that the plant once offended the Gods, so they condemned it to a life of having to look on while pretty girls were being kissed.

Any Thor fans out there? You’ll be interested to know that mistletoe plays a big part in the Norse mythology. Legend has it that Baldur, grandson of Thor and son of the goddess of love and beauty Frigga was so beloved by his mother and the other gods. After he dreamt of being killed, they all sought to protect him from all the dangers of the world and his mother asked everything that sprang within the four Elements not to bring him harm. This led Baldur to become invincible and Loki, god of evil, became jealous of his powers.  He then fashioned an arrow from the wood of the mistletoe – as it turns out, the only tiny plant which Frigga had forgotten to take an oath from – and murdered Baldur in front of all the other gods. It is thought that Firgga’s tears became the mistletoe’s white berries. In another version, Baldur is brought back to life and in her joy, Frigga kissed everyone who passed beneath the mistletoe its tree, so she decreed that “mistletoe would never again be used as a weapon and that she would place a kiss on anyone who passed under it.”

The Druids called the plant “Allheal” believed that the mistletoe berries represented the semen of the Gods – thus a magical aphrodisiac. They also believed it could cure illnesses, serve as an antidote to poisons and witchcraft. In fact, during the winter solstice, the Chief Druid would cut the sacred mistletoe from the Oak in a ceremony ritual the divide the branches and hand them out to his people, who would hang it in their doors for good luck and protection against evil – a tradition which continued throughout the Middle Ages.

Today – Mistletoe is most commonly used as a tea – which is taken to help relieve blood pressure and circulatory problems – especially in continental Europe. In Britain, it has never taken perhaps due to concerns over toxicity.

Surprisingly, there seems to be a proper etiquette for kissing under the mistletoe: the man can only kiss a woman on the cheek and remove a berry from the sprig. Once the berries are gone, so does the kissing! If a couple in love exchanges a kiss under the mistletoe, it is interpreted as a prediction of happiness, long life and a promise to marry.

If this has you feeling all romantic, check out our Christmas Gift Guide with our top picks for the special men in your lives.

The Dutch born super-model, Anne-Marie Van Dijk, and founder of ‘CLEANSE: One Body, One Planet,’ an initiative dedicated to providing professional health and wellness…