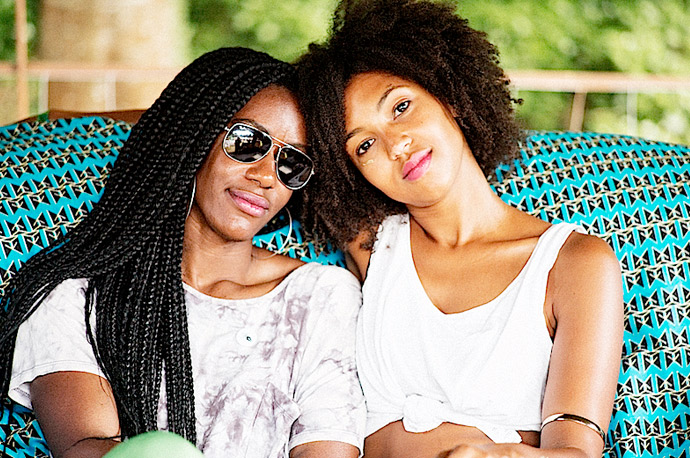 Featuring a range of products that represent a fusion of the cultural history and diverse landscape of Britain with their African roots, Liha is the brainchild of Liha Okunniwa and Abi Oyepitan who set out to create a brand of natural skincare to share their penchant for natural formulations with the rest of the world. Blending traditional ingredients passed down through the generations, drawing on their own cultural heritage and the herbs and tinctures of Pagan Britain – the Liha range represents culturally diverse, modern Britain at its best. We spoke to Liha Okunniwa about what inspired this culturally curated range of natural beauty must-haves.

What inspired you to create Liha?
When we tell people we’re 34, they always ask us what we use. So we finally decided to start selling it!

Abi and I have been close since we were at University. She was a professional athlete and I was a weird art slacker, but we clicked over our love of natural cosmetics and natural hair. Back then if you saw another girl with an Afro, it was rare so we kind of bonded over that! Abi would always bring back this amazing Shea butter and coconut oil when she had been in Africa and we would mess around with it.

When she was participating in the Olympics, she wanted something super moisturising with a subtle but powerful essence and that’s when we discovered the Idan Oil. Neither of us are big perfume wearers as we react badly to the chemicals so it’s a great alternative for us. It kept going missing off our shelves and so many people asked if they could buy it which inspired us to just go for it!

How did your upbringing and cultural influences go on to inspire the ingredients used within both products?
In traditional Yoruba culture, women learn to make soaps, lotions and hair products from plants, seeds and flower essences just as we would learn to cook. A lot of these natural ingredients are still relatively unknown to Western culture so we wanted to incorporate them into our products. For example, Tuberose is a night blooming flower which in Africa symbolises mythical qualities, but because it is so expensive to extract the oil, you mainly find synthetic versions, and we wanted to find a solution to this. Shea is a great starting point to making your own body products (see recipe below), or as an alternative to petroleum jelly as an all-round salve.

I got into aromatherapy at a young age, just from hanging around my mum when she was making up tinctures for sore throats or lotions for rashes so it’s kind of second nature. We set out the range to mix these amazing African ingredients with traditional British remedies and Gloucestershire grown herbs to produce something new and different.

You use a unique processing method in your formulations ‘enfleurage’. What does this consist of?
It is an old, time consuming process which, due to expense, is not used much anymore. It basically involves soaking a large number of flowers in fat so the fragrance is absorbed naturally. Traditionally in Western fragrance culture (mainly in the French town of Grasse) this was done with animal fat, but in Africa this is replaced with coconut oil. We have kept a flower in each bottle as a reminder of this process. Plus it looks pretty.

Both of your products can be used in a multitude of ways; what are your favourite ways to use each product?
Shea — I love to use the Shea as a lip balm under lipstick to create a sheen-like stain. I also used it a lot for my daughter’s nappy rash, or cuts and scrapes as she grew up. We both love to use it as a base to make hair masks, foot lotions and body creams, or just raw on elbows and knees.

Idan Oil — Abi uses a little Idan oil as a facial moisturiser whereas I like to slather myself in it all over head to toe before bed and then shower off in the morning to feel extra smooth and fragrant all day. It’s a bit of an indulgence, but what can I say? I’m addicted!

Did you know: Every village and region in West Africa has different variations of Shea butter, and the geological diversity of the land ensures each tree is a little different. The Gold Shea comes from the Shea trees that grow in the russet clay earth in Nigeria and is slightly heavier in texture with a rich, earthy, aroma. This one is very popular with men as a post shave balm or for ashy elbows!

The Ivory Shea is from Ghana and comes from sandy rockier terrain and is lighter with more of a vanilla, nuttier essence.

Both are perfect as bases for making your own body lotion and each gives you a different result depending on the fragrance and intensity of moisture you are working towards. A good rule of thumb for a basic Shea whipped body lotion is:

Whisk until light and fluffy place in an airtight container and leave to cure in a cool dark place for up to two weeks.

We love: the multitude of uses of the raw shea butter; from soothing cradle cap in babies, as an intensively hydrating foot overnight foot balm and even as a shaving cream and natural stretch mark treatment. As for the Idan Oil, we’ve been decanting some of it into a pot and carrying it as a perfume in our bags whilst solid – it’s too good not to!

TWELVE Beauty is a highly esteemed natural beauty range in our books – and in beauty connoisseurs’ aplenty. Developed by cosmetologist, pharmacist and botanical science…